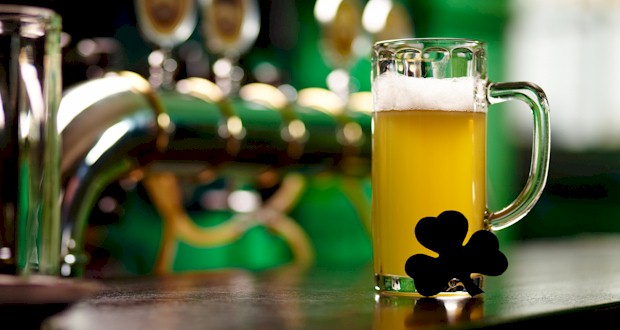 Before you begin cooking the corned beef, you will need some good old-fashioned pants slapping music. Naturally, the Irish Rovers or Clancy Brothers would be a great choice. Now, the best songs to listen to include “The Unicorn; The Orange and the Green; Goodbye Mrs. Durkin; Black Velvet Band; Donald Where’s Your Trousers; Bridget Flynn; Lilly The Pink; and Harrigan.”

“Irish diplomacy is the ability to tell a man to go to hell so that he looks forward to making the trip.” (Irish Saying)

The term corned beef has nothing to do with American corn, but rather an English term from the seventeenth century, for curing and preserving a brisket of beef in salt, which at one time was in the form of pellets (or grains of salt), called corns. Today “corning” is the term used to describe the process of curing a brisket of beef by steeping it in a pickling solution. 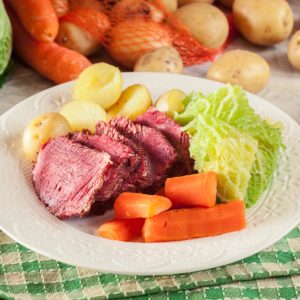 Corned beef, a staple of all St. Patrick Day celebrations is generally cooked by steam, although some cooks prefer to boil, bake, or even microwave it (ouch, when you see the electric bill). I have found that steaming the corned beef in a tall pot used for steaming clams, minimizes shrinkage, maintains moisture, and cooks in less time than other methods. Be certain the bottom of the steamer pot is filled with water, plus the pickling spices, which are often packed with the corned beef. (You can use a tablespoon of pickling spices, available in the supermarket if needed.) Do not trim off any fat pre-cooking, it adds to the moisture. Cook according to the package or your butcher’s advice. To keep the corned beef tender after cooking, let it rest for five minutes before serving. Now, remove any excess fat. To avoid stringy, cooked meat, be certain to slice against the grain.

Here is what I use to cook corned beef. 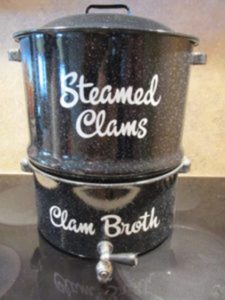 Soda bread gets its name from the fact that you use baking soda (or “bread soda” as it is known in Ireland), as the leavening agent instead of yeast to make the bread rise. Using baking soda also eliminates time spent kneading the dough. Baking soda in baked goods did not exist in Ireland until 1846, when two New York bakers, Arm & Hammer, came to visit. Without them, Irish soda bread as we know it today might not even exist. The traditional recipe only calls for baking soda, flour, sour milk (buttermilk), and salt. Unfortunately, this recipe does not keep and would need to be made fresh every few days. The traditional Irish soda bread is far from the festive, sweet white soda bread, loaded with caraway seeds, candied fruit, raisins, and whiskey (Irish). There is also a brown or wheat soda bread, which uses whole-wheat flour. In Ireland, soda bread is generally consumed for breakfast and often spread with some butter or occasionally jam. 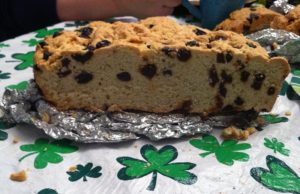 Like many other drinks whose origins are clouded in mys­tery, Joe Sheridan (1909-1962) introduced Irish coffee in 1942. He was the head chef of a catering company at the Flying Boat terminal at Foynes Field (now Shannon Airport) in Limerick from 1938 to 1945. Joe wanted to provide passengers a suitable drink after hours of cold planes and bumpy flights. Flight attendants would ease the pain by adding a shot of whiskey to hot coffee. The whiskey became Irish when the flights arrived or departed from Shannon Airport in Ireland. 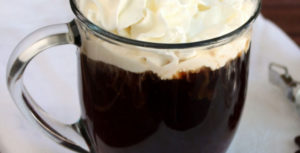 Although Ireland produces its fair share of cheese, the most popular in the U.S. include: 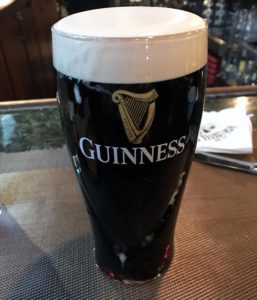 I enjoy beer on St. Patrick’s Day. Everyone has their favorite and the most popular Irish beers are Beamish, Galway Hooker, Guinness, Harp, Murphy’s, O’Hara’s, and Smithwick’s. However, my favorite is Guinness Foreign Export Stout, available only in four-packs. Guinness Stout is relatively low in carbonation and should ideally be served at 55 degrees Fahrenheit.

Ad slogan for Guinness: “Over seven million Guinnesses are drunk every day.”

Popular reply: “I didn’t know it was such a large family.”