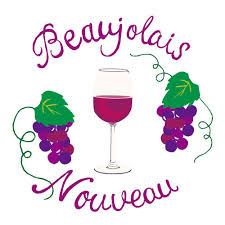 Beaujolais Nouveau (known as Beaujolais Primeur in France) is the “new” Beaujolais wine that has been fermented to capture the ultimate in lightness and freshness besides its intense grapy aromas and flavors.

Beaujolais is a grape-growing district below the southern part of Burgundy, between Lyon and Mâcon. It is about 35 miles long and between seven and nine miles wide. Beaujolais is both the name of the place and the wine made there and was named after the village of Beaujeu. Beaujolais is made from grapes coming from the appellations of Beaujolais and Beaujolais-Villages within the district.

Beaujolais is made from a red grape called Gamay, which produces light, fresh and fruity wines wherever it grows in the world. The wine owes its easy drinkability to a winemaking process called carbonic maceration (called whole berry fermentation).  This technique preserves the fresh, fruity quality of the wine, without extracting bitter tannins from the grape.

Beginning in 1951, the official release date of Beaujolais Nouveau was November 15. However, in 1985 the release date was changed to the third Thursday in November regardless of the specific date.

“Beaujolais wines are deliciously fresh to the palate. They charm you with their delicacy, tenderness, and lightness.” (Curnonsky {Maurice Edmond Sailland} French writer, 1872-1956)

This youthful wine has limited aging potential; therefore, it is enjoyed within a short time after fermentation. Nouveau is at its best when it first appears on the market. After one year it is tired and with few exceptions should be forgotten.

Beaujolais Nouveau should have the fresh, full, fruity bouquet and flavor of blackberries, candy-apple, cherries, plums, raspberries, red lollipops, strawberries, spices, violets, and an overwhelming freshness. On the palate, Beaujolais should be young, lively, and joyous.