Wine & Bacon: What a Combination! 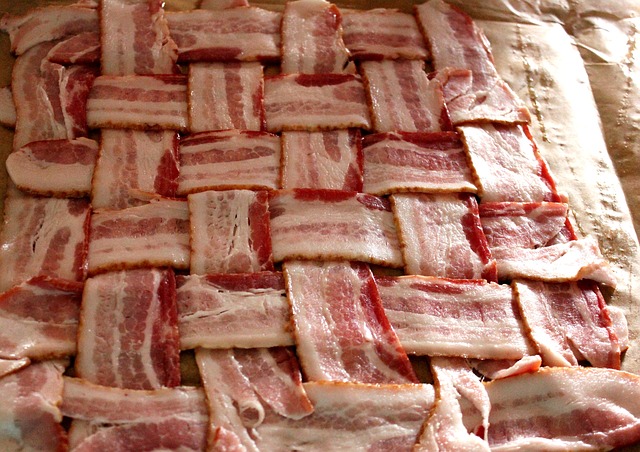 There are few greater aromas in the world than the smell of bacon sizzling in a frying pan. In fact, bacon’s mystical “sizzling sound” is reminiscent of the pattering of rain striking the ground.

Bacon in one form or another is made throughout the world in a multitude of forms, styles, flavors, and names. Bacon refers to cured pork from the belly, back or side of a hog. American bacon is mostly cured pork belly that’s salted, cold smoked, and cooked before eating.

Besides pork, you can find chicken, duck, and turkey bacon. We are all familiar with the salty, thin pink strips of streaky fat bacon we buy in supermarkets. But there is also Canadian bacon (back bacon), Irish bacon, rashers (British bacon), Asian bacon, and even vegan bacon. Let’s add to the list guanciale and pancetta from Italy.

To help guide your wine choice, the bacon being paired is American-made, smoked, regular thin cut, cooked medium to slightly crispy, leaving some fat behind for added texture and flavor. 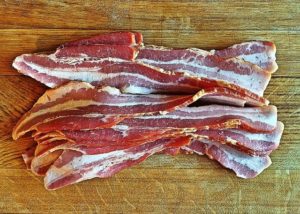 Now, if you like to wrap your foods with bacon; scallops, filet of beef, chicken drumsticks, corn on the cob, asparagus, dates, or even hot dogs, other wines can be served with it.

Bacon, although a white meat (pork) has immense rich, chewy, and hearty flavors that are reminiscent of red meat. Bacon is the best of both worlds; it can pair with red and white wine, and even chilled rosés.

Words such as “bacon,” “bacon fat” or “smoked meats” are descriptors for certain red wines (Mourvèdre and Syrah) especially from the Rhône Valley of France. Other red wines that often display the bacon smell are Pinotage (South Africa), Schiava Grossa (Italy), and Shiraz (Australia and South Africa).

For vodka lovers, there is a bacon-flavored vodka and an interesting beer from Franken, Germany known as Rauchbier, which has a smoky, bacon-like aroma and flavor.

In closing, there is no such thing as too much bacon and everything does tastes better with bacon.

Bob Lipinski is the author of 10 books, including “101: Everything You Need To Know About Whiskey” and “Italian Wine & Cheese Made Simple” (available on Amazon.com). He consults and conducts training seminars on Wine, Spirits, and Food and is available for speaking engagements. He can be reached at www.boblipinski.com OR bkjm@hotmail.com